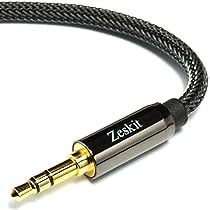 It's a shame that such nicely built cables don't have the durability one would expect them to have
By Critical Eye
Despite the very sturdy design and high purity copper used in these cables, I must warn potential buyers that these are NOT reliable cables, particularly the male to male cable. Fortunately, my Zeskit male to female extension cable is still working after some months of use, but I have now gone through not one, but TWO male to male Zeskit cables that both mysteriously began to lose connectivity to my headphones after 2 to 4 months of use each. The second time this happened, I assumed it was a problem with the female jack of my MSR7's, but after swapping it out for Audio Technica's included audio cable, I quickly realized to both my relief and disappointment that it was the Zeskit male to male cable that was at fault. Don't be fooled by the positive reviews for these cables, most of them were provided said cables from Zeskit free of charge in order to get some positive reviews out of them. In addition, it's unfortunately very common for positive reviews on a faulty product to be written shortly after the reviewers have received said product rather than waiting an appropriate length of time to gauge the durability or lack thereof for the item in question.

On April 3rd I got an email (sent through Amazon) from Zeskit customer service asking me to, **when I read between the lines, basically take my review down or alter it to be more positive in exchange for some replacement cables. The representative had said that Zeskit had strengthened the male ends of the cables and initially I was going to take my review down, but then I checked the 1 and 2 star reviews to see if any recent reviews had been submitted. Unsurprisingly, a number of reviews had been written describing the same problem I experienced with both of the male to male cables I ordered, so until these so-called changes to the product are reflected in the reviews, I will NOT take my review down. The only way this review is going down without such changes being reflected in the reviews themselves is if Zeskit decides to censor me directly. This is the only critical review I've written for an Amazon product that has clearly resonated with customers in a significant way and warned presumably quite a few potential customers away from an untrustworthy company.

Broke after just two days. (UPDATED)
By Chesley
First off, let me begin by saying that I have never rated anything with just a one star. I really wanted to love this product and hoped for it to last a long time. I mainly purchased this because I thought since the cord is braided, it would last longer than traditional non-braided ones (this has previously been the case with other braided cords I've purchased). However, this didn't even last me two full days. I was using this aux cable in my car, when the audio started playing out of only my right car speaker. I panicked, thinking it was my car speakers...Surely my brand new aux cable couldn't have already broken, right? Wrong. I unplugged the Zeskit aux cable and plugged in a different one and then the audio was normal again. I later tried using the Zeskit one again and the same thing happened, along with a lot of static feedback. I contacted Amazon about this and thankfully, they issued me a refund. This aux cable went in the garbage. I do not recommend this product to anyone, and I suppose you really do get what you pay for.

*UPDATE- 08/12/16*: The seller contacted me on 06/29 and told me the cable I received was most likely a defective one. Apparently according to their statistics, this usually happens with every 1/900 of their aux cords. I was offered a replacement so I could try the product again. I have now been using the replacement aux cord for about a month now and haven't had any major issues with it. Once in the past month, the audio in my car temporarily cut out and had a bit of static feedback for about three seconds. I got worried and thought the aux cord was going to mess up, but I believe that was just a false alarm because it has continuously worked perfectly fine since. In fact, it actually works better than a lot of the more expensive aux cords I have purchased in the past. Changing my review to 4 stars. The customer service was great and I am impressed with how quickly they contacted me and gave me a chance to try out the product again. I will post another update if anything changes!

Tough and Well Made
By H. Kane
I needed an interconnect between my iMac computer and Nobsound integrated amp and decided to try the Zeskit cable. I wanted something relatively small yet well constructed and this cable fits both criteria admirably. The 3.5mm connectors are robust and well terminated and the cable jacket itself appears tough enough to withstand just about any abuse. All in all a very well made cable. 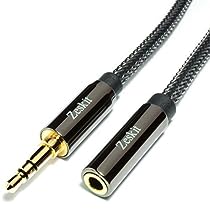